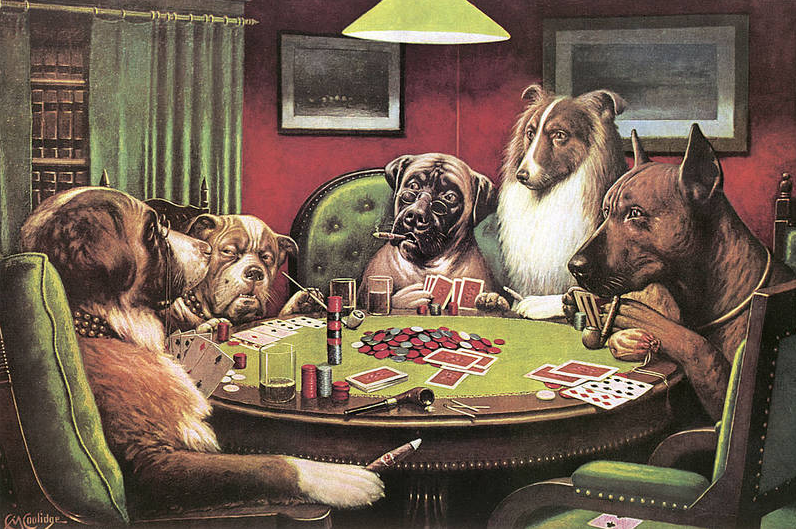 You know what the traditional entertainment business is? It’s a poker game with six seats at the table. Five of the seats are taken, and one of the seats is always open. That seat is reserved for you, as long as you have money. Doesn’t matter what stakes you want to play for — whether you’re a multi-national cash machine like Coca-Cola, or an optometrist from Minneapolis who has ten grand to blow that’ll give you and your husband something to talk about at dinner parties for the next couple of years — there’s a game for you, with one seat open at the table.

The five other seats at your table will be taken by, let’s say, an Actor, a Producer, an Agent, a Director, and a Distributor. Who they are and what roles they’re playing do not matter as much as the fact that they are all playing for the House. Each of them, individually, can afford to lose more hands than they win, because together they win a lot more hands than you. Eventually they end up with all your money. And that’s the game.

The House Always Wins. This is the first rule of the entertainment business. Don’t get me wrong, it’s a fun and adventurous game if you can afford to play it. Or if you want to have a career playing for the House. Just know the game mechanics of what you’re getting into before you take a seat at the table, that’s all. Same as with any risk you take.

The producer/writer Hal Barwood and I once got into a conversation over dinner in London about what to tell young folks from our small hometowns in New Hampshire and Indiana, respectively, who would basically show up on our doorsteps looking for help getting into the industry.

“I tell them to give up and go home,” he said. “The ones that have a real chance of making it aren’t going to listen to you, they’re going to do it anyway, and the ones who aren’t going to make it will cut their losses early and go home, and I’ve saved them two or three years of disappointment and heartache.”

So take Hal Barwood’s advice when it comes to your dreams. Give up. Go home. And to those of you who stay anyway, welcome. The only dreams that matter are those that come to life. Just know the game you’re getting into. Like this —

Edgar Bronfman Jr., heir to the Seagrams fortune, a genuine lover of music and theater, lost control of his family’s company, and today that company is no more — outcomes of a game Universal and Warner Bros. seduced him into playing from the mid 1990s to the early 2000s.

Know why wealthy entrepreneurs like the Simons real estate developers of Indianapolis [MGM, Love at First Bite] and big names like Coca Cola [Columbia Pictures] and Vivendi [Universal, with Bronfman, Jr.] thr0w up their hands and storm out of the game after playing it for a few years, and if you mention it around them today, it is as if you’re bringing up a crime in their family history. They’d rather not talk about it.

It is a game in which Sony [Tri-Star, Columbia] once lost $500 million to a hair stylist playing for the House. A game the parent company still can’t figure out how to get out of without losing face. Which is exactly how the other players at the table have designed the game — like a maze with morphing walls — and what informs their strategies.

In certain games there are lots of toxic strategies at play — strategies like cross-collateralization [offsetting profits from hits against massive write-offs from films that bomb; or losses in one  market against profits in another], net profit points [‘monkey points’ Eddie Murphy famously calls them], syndication investment packages [Silver Screen Partners, The German Fund, The Malaysian Sovereign Fund], studio overhead [55% anyone?], and offshore financing [see: Panama Papers] — that tilt the odds even farther toward the house and treat investors like marks to be conned. Mike Mnuchin, currently playing for the House of Trump, has been a high profile participant in games that involve these kinds of strategies and risks to investors. In the lower stakes games, of course, the risk to you, the investor, The Sixth Player, is always that the game will end as soon as you lose an all-in bet. The game has your money and the game is gone. Have a nice day.

Over-The-Top [OTT] distributors like Netflix, Amazon and Hulu are finding big players — talent and investors — who want to get in their games, in part because they offer more equitable odds. OTT disruption is why most of the major networks and entertainment companies are making big side bets on similar models [with Alternative Programming divisions e.g.], in order to play with content, distribution and equity in new combinations. These new games are good, if only because they can’t be any worse than the old ones.

In these new games, the players, including the money investors, are not playing for the House, they are playing for themselves, and, more than that, for the game itself. One player’s win does not have to correspond to another’s loss. The OTT game mechanics, will be more like StubHub or eSports or WWE than poker, because: a) the House cut is more transparent; b) they are platforms that can carry unlimited amounts of content, because; c) they get played and viewed in networks, and networks are open-ended, and generative. The new game is an engine designed to produce outcomes, stories and, ultimately, transactions on a global scale. The Big Agreement by all the players is to all work toward making their game productive and sustainable.

If you’re getting anywhere in business, or in life, for that matter, you’re never not in a game. Know your game.

If you cannot relate to the entertainment business, or whatever your endeavor, as a game whose design will determine your equity in it, here’s another analogy you may find more fragrant and to the point:

My friend, the director Carroll Ballard [Black Stallion, Fly Away Home] says his grandfather used to tell him a story handed down from the Washoe Nation that originally inhabited the Lake Tahoe area where Ballard grew up, about a time when dogs once ruled the world. They walked upright, on two legs, and they got their wisdom by sharing what Ballard’s grandfather called The Sauce. As long as they had The Sauce, he said, they were supreme among the animals. Then one day Man came along and stole The Sauce from the dogs, and learned to walk upright. Without The Sauce, the dogs lost their wisdom, and forgot how to walk on two legs, dropped down and began walking on all fours. And the reason dogs go around sniffing each others’ asses today, is that they are checking to see if any of them still has The Sauce.

“That’s the business,” grouses Ballard. “Dogs going around sniffing each others’ asses to see who has The Sauce.”

And by the way, if you do happen to have The Sauce, nevermind Ballard —if you have The Sauce, you won’t anyway— please get in touch. It’s urgent. We have a project we’ve been trying to cast for weeks and you’d probably be perfect for it.

There Must Be Dragons

Preparing for a Post-Robot World